30 YEARS AGO THIS MAN WARNED AMERICA.

Related:  Who made the useful idiots of the left? 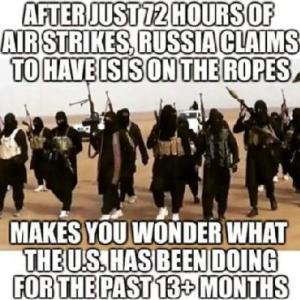 Washington continues using Islamic State and other takfiri terrorists as US proxy foot soldiers, waging naked aggression on Syria, largely affecting millions of civilians, creating a human flood of internally and externally displaced people along with mass slaughter and destruction.

The grand deception about Russian forces and warplanes operating in Syria persists. It’s one of many Big Lies circulating to vilify Putin. Moscow has been forthrightly candid all along – explaining its obligation to supply Syria with contractually agreed on weapons, the only nation providing humanitarian aid along with UN efforts.

Russian air flights delivering military and humanitarian aid arrive daily. Moscow openly confirms it. It’s forthright about its relationship with Assad’s government – unlike Washington’s duplicitous agenda to topple it, no matter the cost in human life and misery.

On September 18, the Wall Street Journal headlined “Russia Moves Its First Tactical Fighter Jets to Base in Syria,” – citing unnamed US defense officials as their source, the Journal saying:

(T)he surprising Russian escalation…to send in jets…is the clearest indication Moscow is preparing to use military might to help Mr. Assad as he clings to power.

The direct involvement of Russian forces in the Syrian civil war on behalf of Mr. Assad would mark a new twist that could put American pilots, who regularly fly surveillance flights and airstrike missions, in substantially greater danger.

Fact: Pentagon reports are notoriously fabricated – all propaganda all the time.

Fact: Russia forthrightly respects the sovereignty of all nations. Syrians alone have the right to decide who’ll lead them, not foreign powers. They overwhelmingly support Assad.

He clearly said earlier he’ll retain his leadership position only as long as Syrians want him. Otherwise, he’d step down.

His daily burden is far more than ordinary people could handle. He continues going all out to defend Syria for Syrians. He deserve praise, not rebuke, for his efforts.

Fact: Russian aid is to help him defeat ISIS and other takfiri terrorists, a scourge wherever they’re deployed.

Propaganda wars precede and accompany hot ones. Joseph Goebbels once called truth “the mortal enemy of the lie, and thus by extension, the truth is the greatest enemy of the State.”

Disinformation repeated often enough getting most people to believe it is its greatest ally – the bigger the lie, the more likely.

Putin spokesman Dmitry Peskov said earlier and as recently as Friday, no Russian military forces operate in Syria – nor are combat missions being flown.

At the same time, if Damascus requests Russia’s military involvement, “it would be discussed and considered. So far it’s hard to hypothesize,” he explained.

Syrian Foreign Minister Walid Moallem said Damascus “would ask Russia to dispatch its troops to fight on the Syrian army’s side, if it becomes necessary.”

If the need arises, Syria would not hesitate to request this of Russia. At the moment, there are no Russian troops in Syria.

Most of all, Moallem and Assad welcome efforts made to resolve things diplomatically. Russia’s best previous attempts failed because Washington undermined them.

Moscow and Syria want peace and stability. Obama wants war. Nothing indicates a change of policy – replacing Assad with a pro-Western stooge, no matter how much more mass slaughter, destruction and greater human floods it takes.

Stephen Lendman lives in Chicago. He can be reached at lendmanstephen@sbcglobal.net.

His new book as editor and contributor is titled “Flashpoint in Ukraine: US Drive for Hegemony Risks WW III.”

Visit his blog site at sjlendman.blogspot.com